The Biblical Significance of the August 21, 2017 Total Solar Eclipse 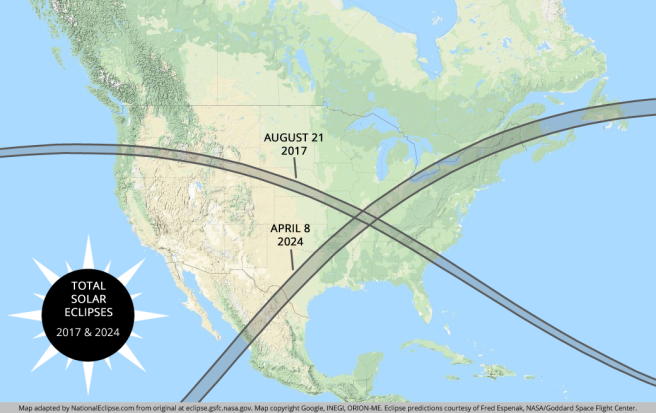 The Biblical Significance of the August 21 total solar eclipse

Koenig: The following was prepared by my assistant Max Obeidin. To say the least, this is very interesting and fascinating information.

In last week’s new report, we shared a commentary by Anne Graham Lotz called “Is God’s Judgment Coming on America?” about the upcoming total solar eclipse on August 21. In Anne’s commentary (http://www.annegrahamlotz.org/2017/08/07/gods-judgment-coming-america/) she linked to a sermon by Australian pastor Steve Cioccolanti where he discussed the eclipse. One of the things that he mentioned is that zone of totality first arrives in Oregon at 17:16 UT (or 10:16 AM PDT), which is the same time the sun sets in Jerusalem at 7:16 PM. But there are a least a few other significant facts about the eclipse that seem to relate to the US role with Israel.

The National Eclipse Blog says, “From Oregon to South Carolina, the eclipse will trace a 67-mile-wide path across the country and millions of Americans will witness a once-in-a-lifetime event as the moon passes between the earth and the sun and day turns to night for up to almost three minutes.” (https://nationaleclipse.wordpress.com/2016/06/28/x-marks-the-spot-two-total-solar-eclipses-in-seven-years/)

Other sources have also noted that the path of the eclipse averages 67 miles wide. This 67-mile-wide ‘line’ so-to-speak essentially cuts the United States in half at a diagonal angle, dividing the land into two parts.

In the year 1967 Israel regained control of the eastern half of Jerusalem, as well as the Gaza Strip, West Bank, Golan Heights, and the Sinai Peninsula (although Sinai was later given back to Egypt). People that call for a two-state plan often mention the pre-war 1967 borders that existed before Israel regained control of Jerusalem and those other areas, sometimes referring to them as the ’67 lines. While our president is hoping to make the ‘ultimate deal’ for a two-state plan which would involve dividing Jerusalem and Israel based on using the ’67 lines as a starting point, America is symbolically being divided by a ’67 line.’ This seems to be very significant. The path of the 2017 eclipse also looks like it is sloping downward since it moves from the Northwest to the Southeast. Even this shape could possibly have a significance. In economics, when a line appears on a graph in this shape it is typically used to show a decline in something. It also looks like a slash mark across America, which is often used to negate something (i.e. think of a no eating symbol on a bus).

Washington, DC is not in the path of totality of the eclipse. However, there is another interesting fact which may be symbolic. According to timeanddate.com (https://www.timeanddate.com/eclipse/in/usa/washington-dc), the eclipse reaches it maximum level of coverage over Washington, DC (of about 81%) at 2:42 PM. In 1967, the UN Security Council passed Resolution 242 which called for “withdrawal of Israel armed forces from territories occupied in the recent conflict.”

Not only is there the concern that this eclipse could be an indication of God’s judgment, including for the U.S. role in the peace process, there is also further concern because another solar eclipse will happen approximately seven years later April 8, 2024. When you take the paths of the phase of totality of these two eclipses and cross them together, it makes a large ‘X’ over America which is centered close to Carbondale, Illinois. What makes it even more significant is the size of the area where the paths of totality cross. National Eclipse Blog describes it as such, “Because the 2017 eclipse travels across the country from northwest to southeast and the 2024 eclipse makes its way through the nation from southwest to northeast, the two paths cross each other and create a zone of overlapping totality of almost 9,000 square miles, or roughly the size of New Jersey.” (https://nationaleclipse.wordpress.com/2016/06/28/x-marks-the-spot-two-total-solar-eclipses-in-seven-years/) The size of Israel is often compared to the size of New Jersey. Many pro-Israel speakers will distinctly say that Israel is “about the size of New Jersey.”

An ‘X’ over something is often used as a symbol of rejection. What does it mean for America when these two eclipses that are about seven years apart have paths of totality that form an ‘X’ over America with an area of overlap that is close in size to Israel?

While there are certainly other factors that are leading our nation further into God’s judgment, could the two eclipses be a warning that the tipping point for judgment is touching the land of Israel?

Even if this is so, as believers in Jesus we cannot live under a spirit of fear. One of the most amazing things to reflect on about these eclipses is that God already had these celestial events planned even before he set the sun, the earth, and the moon into their orbits. And even though the warning of judgment is a cause for concern and prayer about America, there is also something that we that live for Jesus can take comfort in. And that is that God is sovereign over the events of the Universe. He already knew before the world was created how all these things would take place. He knew the timing, locations, and parameters of these events. Not only did He know them, but He was the One that ordained and orchestrated these events according to His divine and sovereign plans. And this is a good lesson for our lives.

Do we trust that the God who set the sun, the earth, and the moon into their orbits and planned these celestial events out plans our lives with perfect knowledge and understanding? Do we believe that if we let God guide our steps that He will orchestrate them in a way that is in perfect alignment with His sovereign will? And do we trust that even in the midst of any upcoming judgment that our nation may face, that God can give us the strength to focus our eyes on Jesus and to do our part to the do the Lord’s work?

There is indeed concern about what is coming to America. And this means that we must pray for God’s mercy, pray for our own safety and the safety of others, and especially that we pray for the salvation of those that do not know Jesus. And we must share the truth of God’s word and the Gospel when it comes to our individual and national accountability for sin and the need to repent, and we must also share God’s biblical truth about not dividing the land of Israel. But we should do this with confident eyes on Jesus. When judgment comes, it will shake America, but Jesus will never be shaken! We will do our best to overcome what we may face nationally and individually if we are confident in and established firmly on Christ the Solid Rock!